New name, same most everything else

A friend and I dined at 900 Wall last week, the former Merenda Restaurant & Wine Bar. I was so happy they reopened this restaurant because I love the outdoor seating. Makes for great people watching (and vice versa – who wouldn’t notice two blondes eating on a street corner with four glasses of wine in front of them?).

Here’s the view of Wall Street from our table. We live in such a cute town!

I have one complaint, residents. If you are going to leave your dog in a hot car for two hours while you have dinner, better not leave that car alarm on. This happened right next to us and this dog was freaking out, barking, whining and set the car alarm off nine times. NINE TIMES! And we just knew the owners were nearby because they kept turning it off. I’ve never been closer to giving the finger in public than when the middle-aged couple returned to their car, in front of a full restaurant staring at them increduously. Whatever, people.

Anyhow. Our overall dining experience was great and definitely expensive (this is relative)…so I won’t be returning for a while (need to save up!). We started with the wine flights. My friend got the chardonnay flight and I got the rose flight. It was fabulous.

Then, we ordered the fritters, which were not risotto fritters as Merenda was famous for. These were potato and chorizo fritters and they were delicious. 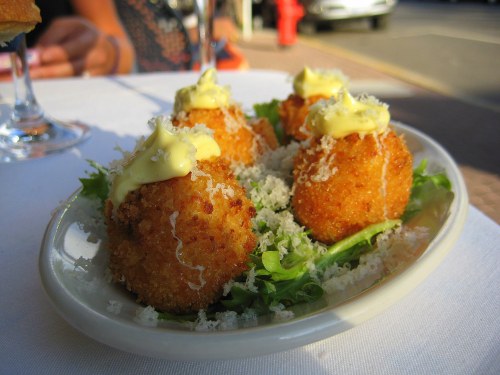 Then, of course, we ordered some oyster shooters – my favorite warm weather appetizer. 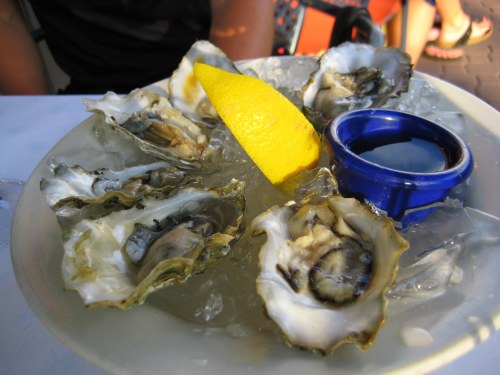 Later, another friend showed up and a very rude hostess informed us that due to OLCC regulations, they couldn’t seat him with us. I understood that and would have been happy to move inside, but the rude hostess just gave me a look up and down and an expression like, “So THERE.” We eventually moved inside, which caused our pizza order to get messed up and it took 50 minutes to get to us, and they brought the wrong one, which cost $4 more (I was pissed! Shouldn’t they have comped it?). But we didn’t care at that point, it was fun just hanging out.

Multiple people have asked me if it was still “loud” in there. I had never noticed that it was exceptionally loud in Merenda. And 900 Wall seemed the same, so take that as you will. Note on our waiters: they had really great personalities, very notable.

I really hope 900 Wall survives, I think that corner spot is critical in maintaining a vibrant aesthetic to downtown Bend.

This entry was posted in Uncategorized. Bookmark the permalink.

3 responses to “New name, same most everything else”