Ah, dumplings. A soft, chewy cup that holds a combination of shrimp, cilantro and a dark sauce of soy, sesame, ginger, rice wine and scallions. I probably added too much of the sauce to my stuffing because it turned rather dark, but let’s just say the darker, the more flavorful. Lord, you can’t go wrong with those flavors together.

Mark Bittman tweeted this recipe and I watched the quick video, deciding it was easy enough for me and perfect for an upcoming Chinese New Years party. His directions are pretty spot-on, except mine took at least twice as long to steam because I don’t have a proper steamer.

1. Combine the soy sauce, rice wine, sesame oil and ginger in a bowl. Put half the shrimp, half the cilantro and all the scallions in a food processor and pulse; add just enough of the soy mixture to create a smooth paste, about 1 to 2 tablespoons. Transfer to a bowl. Roughly chop the remaining shrimp and cilantro, add them to the bowl and stir to combine.

2. Place a dumpling skin on a work surface, moisten the edges with water, and put 1 teaspoon of the filling in the center. Gather the edges of the wrapper up around the filling, squeezing gently, to pleat the sides; some of the filling should remain exposed. Repeat with the remaining dumpling skins and filling, keeping the dumpling wrappers and dumplings covered with damp towels while you work.

3. Rig a steamer in a large pot over an inch of water; bring to a boil and reduce to a simmer. Meanwhile, add the lime juice to the remaining soy mixture to make a dipping sauce.

4. Put as many dumplings in the steamer as you can fit in a single layer and cover the pot. Cook until the exposed filling turns pink and the wrappers are tender, 4 to 6 minutes, then transfer the dumplings to a serving platter. Repeat with the remaining dumplings. Serve with the dipping sauce. 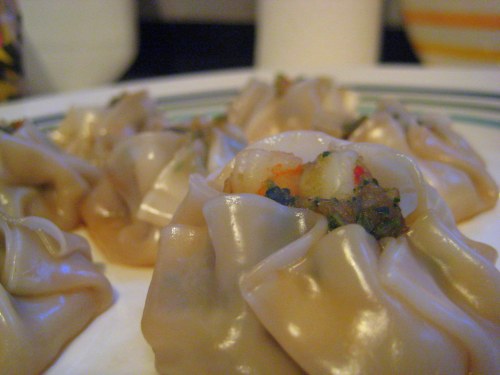 I highly suggest you watch the video before making these, because the wonton-wrapping method may take some time. But if you’ve ever made gyoza, you’ll be fine.

Served hot and at room temperature, mine were delicious! I sprinkled extra cilantro over them and little bowls of the whisked sauce. They were very popular at the Chinese New Years party, which also featured:

And home made fortune cookies (my fortune said to give lots of money to bald men…): 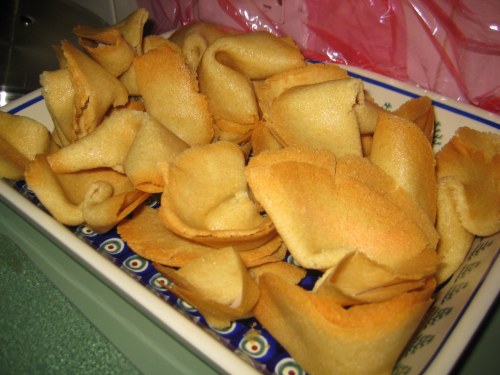 We drank some yummy Chinese beer that Grant got at City Beverage (what a cool place!) and munched on all the other tasties. Thank you to Simply Seton for hosting!

Enjoy the Year of the Rabbit, friends! xoxo