Shrimp and Grits with Andouille Sausage

Oh, shrimp and grits. So Southern, so low-country, so unhealthy. But what’s not to like about a combination of creole spices, firm shrimp, peppers, onions and sausage simmered with cream and then poured over grits (cornmeal) mixed with lots of cheese? I don’t know how shrimp and grits originally came to be, and I don’t much care. I’ve eaten all sorts of versions – with grits cakes, creamy grits, watery grits, seared shrimp, fried shrimp, boiled shrimp, etc. But never made my own…

I saw this recipe at Closet Cooking and it appealed to me because I happened to have many of the ingredients on hand. Part of my commitment to “being an adult” this year is to do more proactive grocery shopping: buying ingredients that are common across different meals and that have a long shelf life. Grits – I just used plain yellow cornmeal, which most cooks have; shrimp – had some in the freezer; andouille sausage – I had some left over from probably last year, but any smoked ham would do; onions, peppers, celery, cream, etc.

The recipe calls for cajun seasoning and wouldn’t you know it, I could only find creole. What’s the difference? This, again, falls into the I-don’t-care territory, and it still tasted so spicy and wonderful. #don’tsweatthesmallstuff

The only thing I would change next time is the peppers. I just don’t like peppers. And they figure prominently in this dish. Perhaps one jalapeno would do the trick? I’m not sure what the solution is, but I aim to find out.

I would also like to point out that Grant questioned why I was using cornmeal and not grits. Now, I’m not from here, but what’s the difference? He literally ate his words later, once his words were full of extra sharp cheddar cheese.

Shrimp and Grits with Andouille Sausage

Bring the water to a boil, whisk in the grits, reduce the heat and simmer until tender.
Meanwhile, heat the oil in a pan over medium-high heat. Add the sausage and sear, about 3 minutes and set aside.
Toss the shrimp in the creole seasoning, add the shrimp to the pan and cook, about 2-3 minutes and set aside.
Heat the oil in the pan, add the onions, peppers and celery and cook until tender, about 5-7 minutes. Add the garlic, thyme and creole seasoning and cook until fragrant, about a minute. Add the broth and tomato and simmer to reduce a bit, about 5 minutes. Add the sausage and shrimp, season with salt and pepper, mix in the cream, and remove from heat.
Whisk the butter and cheddar into the grits (they will be thick, like polenta….in fact, exactly like polenta) and remove from heat.
Serve the shrimp over the grits, sprinkling with green onions and parsley, to taste. 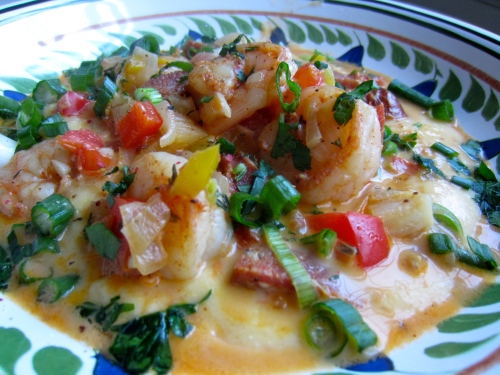 You also might want to add a dash or two of Texas Pete’s hot sauce, just for extra seasoning.

The grits are creamy and the extra-sharp cheddar is perfect in it. The shrimp remain firm and well seasoned, and the sauce is peppery and creamy. It fills you, top to bottom.

This entry was posted in Uncategorized and tagged cornmeal, recipes, shrimp, shrimp and grits, Southern. Bookmark the permalink.

6 responses to “Shrimp and Grits with Andouille Sausage”